Jennifer Hyde, a 9-year-old girl from Chowchilla, was reported missing on Jan. 29,1976. At the time, she was living in Madera County, CA. She was on her way home from a summer school trip, when suddenly her school bus was hijacked by 3 masked men.

The bus driver, Edward “Ed” Ray, was held at gunpoint; the kidnappers were armed with sawn off shotguns, and there were 3 kidnappers in total. Edward Ray was forced to drive the children out to a quarry. There, Ray and the 26 children were forced into what appeared to be a hole in the ground. Ray was terrified, he was sure that he and the children were going to be killed somewhere underground. But when a sawn-off shotgun was pointed at his head, he climbed down the ladder into lightless oblivion below. His kidnappers handed him a flashlight on his way down. 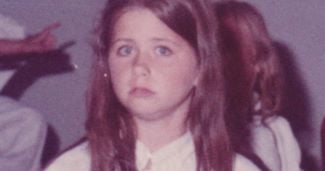 Jennifer Hyde, 9 years old, after being rescued from the quarry.

Ray and the 26 children were stuffed into a truck that had somehow been buried underground. The moving truck contained mattresses and some water, but not nearly enough for the number of people inside; ventilation was also insufficient. But once all the hostages were inside, the kidnappers closed the top hatch and covered it with a heavy sheet of metal; they also weighed the hatch with gravel and two extremely heavy industrial-grade batteries.

The kidnappers later said that they’d been inspired by the 1971 film Dirty Harry. During the climax of that film, the main villain (Scorpio, a serial killer loosely based on the Zodiac killer) hijacks a school bus filled with children and holds them hostage.

The plan was to call the police and demand a ransom for the safe return of their children. However, the kidnappers found that the phone lines were completely jammed. Why were phone lines jammed? Because the children’s parents were already furiously calling everybody they could think to call, asking if anybody had seen their children. The kidnappers decided to wait a few days and then try again. The leader of the kidnappers was a 24-year-old man named Frederick Newhall Woods. 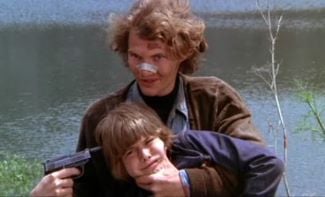 Scorpio, from the 1971 film Dirty Harry. The Chowchilla kidnappers say that this film inspired them to commit the kidnapping.

The phone lines were further jammed up by the firestorm of tips that the story was generating; people from all over the country were calling the Chowchilla police department and offering outlandish theories for what happened to the children. A popular theory was that the Zodiac killer had kidnapped the children; in one of his letters to police, the Zodiac had said he planned to one day killed an entire school bus filled with children. Many now openly wondered if the Zodiac had made good on his threat.

Inside the container, there was complete pandemonium. The smell of having so many children in such a confined space was incredibly nauseous. The children were screaming and crying in total darkness. The older children started singing songs to comfort younger children, and some semblance of order was restored but they were still trapped underground. The ventilation quickly failed, and the container started heating up. Edward Ray realized that, if they didn’t figure out a way to escape, the heat would suffocate them.

Ray decided to try stacking the mattresses on top of each other to see if they could reach the roof; they could. Ray was able to reach the hatch, but it was so heavily weighed down that he couldn’t open it. That was no good; the heat was baking them alive, and they were running out of air; they had to escape or they would die. The oldest child there, Michael Marshall, found a piece of wood and suggested it could be used to pry open the hatch. 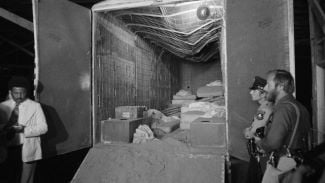 Edward Ray and 26 children were buried alive inside this truck.

Back on the surface, the California national guard was activated and began scouring the Chowchilla area for the missing children. Every TV channel in California was covering this story like it was the only thing happening in the entire world. Every newspaper had this story as front page news. The leader of the kidnappers, Fred Woods, became so intimidated by all the attention that he fled to Canada; Ed Ray and the children were left to fend for themselves.

For hours, Marshall and Ray worked together to incrementally dislodge the batteries. This was an exhausting and painfully slow process, but eventually they were able to use the piece of wood to pry the hatch open just a little bit. They were able to make enough of an opening that Ray could stick one arm through while Michael wedged the hatch open. Using that arm, Ray managed to destroy one of the batteries.

After that, Ray collapsed from exhaustion and fell to the ground, sobbing. Even though they seemed so close to getting out, he just didn’t have the strength to continue. The heat was unbearable. But he managed to lighten the load just enough that the combined efforts of Michael Marshall and the other children were enough. After resting for a few minutes, Ray was able to rejoin with them and with one final effort they finally did it. With all their collective strength combined, they broke through to the surface, pushing aside gravel and debris until they saw sunlight. They’d been trapped underground for 16 hours. 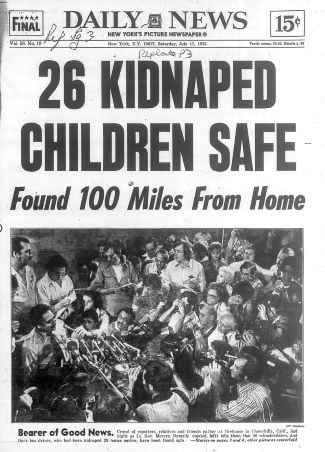 All 26 children were rescued alive. However, many of them still suffer from post-traumatic stress to this day.

Soon after the children broke to the surface, they were spotted by aircraft. Police swarmed the quarry and found the children. Edward Ray survived the abduction and died in 2012 at the age of 91, a local hero. Fred Woods, the leader of the kidnappers, remains in prison to this day as of 2/20/2021.

Survivors of the Chowchilla mass kidnapping say the experience has haunted them well into adulthood. They report suffering from nightmares and panic attacks, as well as an extreme fear of darkness. They have to sleep with the lights on, because even just being in a dark room is enough to trigger intense panic attacks.

The Chowchilla mass kidnapping was covered by the singer Robert Goulet, who produced a song inspired by the incident: The Ballad of Chowchilla Ray.