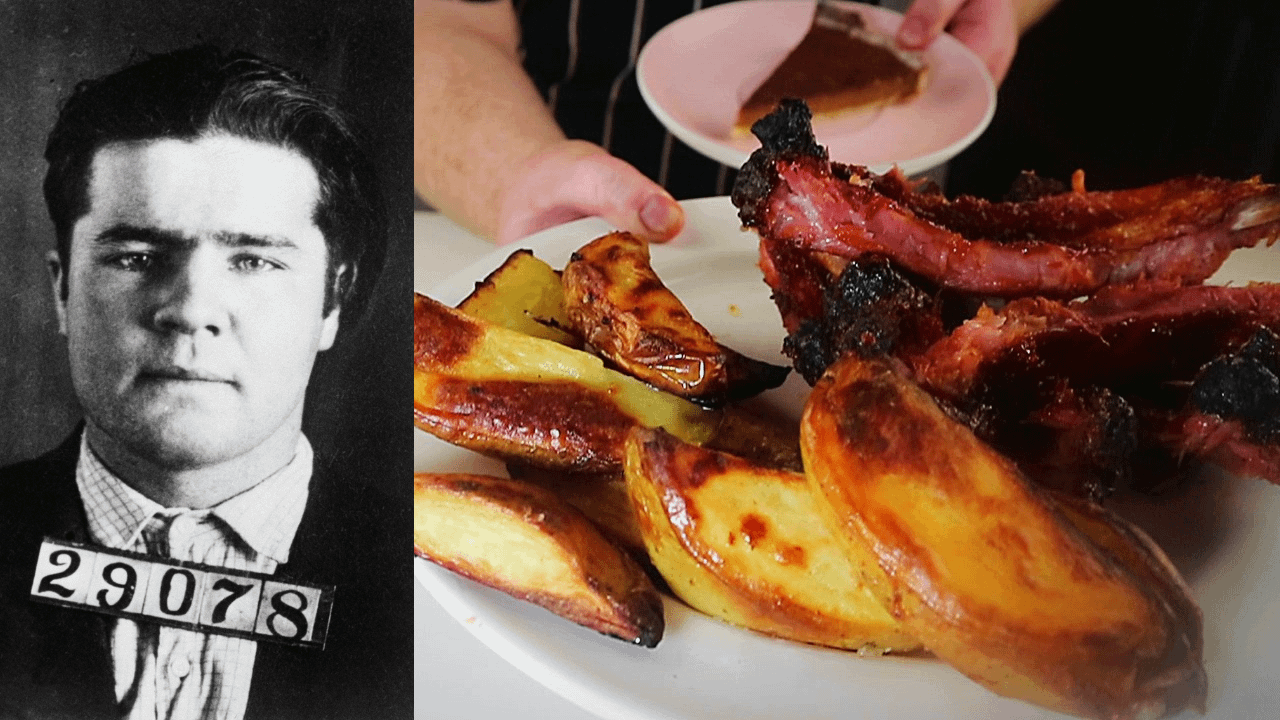 Pretty Boy Floyd was a bank robber who operated in the Midwest states during the early 1930s. He had a particular talent for theft and burglary and an even better nickname to accompany that. However he didn’t quite fit the bill for a stereotypical bank robber as we think of them today.

Floyd was portrayed by the police and media as a murdering, blood-thirsty, bank-robbing psychopath which, in part, was true. He did kill at least 1 person and he did rob banks, however Pretty Boy Floyd also had another side to him and was dubbed ‘The Robin Hood of Cookson Hills’ by Oklahoma locals.

According to accounts who knew him well, including his own son, he was described as a loving and caring father, son and uncle. He often gave money to families in need during the bleak and grim times of the Great Depression, he would regularly bring groceries back for the surrounding neighbours of wherever he was hiding out at the time and he also came across as ‘charming, charismatic and gentle’ when giving interviews to newspapers.

It seems that Pretty Boy Floyd was also aiming for the Robin Hood character that fellow bank-robber John Dillinger had also achieved. Similarly to Dillinger, the accounts of Floyd from those who knew him personally are a strong contradiction to the portrait painted of Public Enemy Number 1 by the newly-formed FBI.

The head of the FBI was the very ambitious J. Edgar Hoover who hated the fact that criminals during the 1930s were glamorized by a public who didn’t have much to get excited about after the thrill of the Roaring 20s had fizzled out. Criminals such as Bonnie & Clyde, Dillinger, Pretty Boy Floyd and Baby Face Nelson had all received mass amounts of coverage from the media, oftentimes generating a fascination from the public.

J. Edgar Hoover was quick to shoot down any glorification of said criminals, especially the Robin Hood character that Pretty Boy Floyd was being depicted as, which would create infatuation in the media. One particular rumour that was circulating and gaining momentum in the press, was that Pretty Boy was destroying mortgage documents whenever he robbed a bank, freeing hundreds of citizens from their debts and potential homelessness.

The fact that Floyd was involved in many bank robberies and murders yet was able to maintain a positive public image infuriated J. Edgar Hoover and he would eventually step up the manhunt for Public Enemy Number 1, by sending his trusty agent Melvin Purvis after the scent of Pretty Boy Floyd, whenever he left one.

Floyd had been hiding out in Buffalo, New York with his bank-robbing accomplice Adam Richetti. Since being named Public Enemy Number 1 by the FBI, the heat in the west and central states, where he had pulled off over 30 bank robberies, was increasing. The pair, with their girlfriends, lived in complete isolation in an upstairs apartment in Buffalo, praying that the manhunt would ease off.

After 12 months of hiding and unbearable cabin fever, country-boy-turned-bandit Charlie ‘Pretty Boy’ Floyd suggested that the foursome return to his beloved Oklahoma Hills. Floyd knew that he could rely on the locals of Oklahoma who regarded him as a hero, not a monster. They referred to him as the ‘Robin Hood of the Cookson Hills’ and the anecdotes of his generosity to those families struggling during the Great Depression would become legend.

They acted on Pretty Boy Floyd’s suggestion and on the night of the 19th October 1934, on route to Oklahoma, they had an accident just outside of East Liverpool on the Ohio River. Floyd and Adam Richetti decided to wait on a hillside in Wellsville, where they had crashed and sent the girls in the car, which was still driveable, into East Liverpool to get it repaired so they could continue to their destination.

Whilst on the hillside, the outlaws were spotted by numerous locals who reported them to the local police. When they were confronted a gunfight ensued and Adam Richetti was taken prisoner, whilst Charlie escaped – something he was very good at.

At first Adam Richetti gave a false name and wasn’t identified however when his mugshot was recognised, which was regularly published along with Floyd’s in the national papers, local police were now aware who Adam was and informed federal officers that his accomplice was Public Enemy Number 1. Melvin Purvis and his G-Men picked up on the scent and the hunt for Pretty Boy Floyd was on.

Floyd hid out in the surrounding woods for 48 hours with no shelter, food or water. Eventually, on the 22nd October, he approached the farmhouse of a widow named Ellen Conkle, about 16 miles from where the gunfight happened. He explained to Ellen Conkle that he had been out squirrel hunting and drinking with his brother when he got lost. Mrs Conkle knew that the man at her doorstep, in an expensive suit and necktie, wasn’t a squirrel hunter however she fed him anyway as it was rare in those days for someone to turn you away at the door.

She made him Spare Ribs, Potatoes and Pumpkin Pie (which I recreate in this week’s video, linked below) and he ate this meal whilst reading about the capture of his pal Adam and the hunt for himself. If Mrs Conkle had just looked at the full-page mugshot, in that same paper, of the man sitting on her patio she would have known that it was Pretty Boy Floyd.

He finished his meal, declared it fit for a king and then paid her $1. Floyd noticed there was a car outside and asked who it belonged to. Ellen Conkle informed the fugitive that it was her brother’s who shortly after, agreed to give Floyd a ride. As they turned out of the farmhouse, their exit was blocked. Melvin Purvis and local law enforcement were going from farm to farm searching for Pretty Boy Floyd and struck it lucky.

Floyd leapt from the car when he saw the agents and proceeded to run through an open cornfield, zig zagging across the ground towards the woods he had been hiding in. With no cover, he was an easy target for the law enforcement which included World War 1 sharp shooter Chester Smith. With a Winchester Rifle, after Floyd ignored orders to halt, Chester Smith shot Pretty Boy Floyd twice and he dropped to the ground. Melvin Purvis then approached the outlaw and interrogated him on the Kansas City Massacre. He denied all involvement and died 15 minutes later. His last words were ‘I’m done for, you’ve got me twice’.

Charles Arthur Floyd’s body was returned home to the Oklahoma Hills, which was initially his end destination. He was buried at Akins Cemetery, on a plot of land where his other relatives were buried. A year before his death he told his mother as he pointed to the plot of land “Right here is where you can put me. I expect to go down soon with lead in me. Maybe the sooner the better. Bury me deep.” Over 20,000 people attended his funeral on October 28th 1934 and his gravesite and Ellen Conkle’s farm are still a tourist attraction today.

But a many a starving farmer

How the outlaw paid their mortgage

And saved their little homes.

Others tell you ’bout a stranger

That come to beg a meal,

It was in Oklahoma City,

It was on a Christmas Day,

There was a whole car load of groceries

Come with a note to say:

Well, you say that I’m an outlaw,

You say that I’m a thief.

For the families on relief.

Moments before Melvin Purvis & co gunned the outlaw down, he enjoyed a last meal of Spare Ribs, Potatoes and Pumpkin Pie and it is that meal you can watch me recreate, plus learn more of the early life of Pretty Boy Floyd and more details of his crimes ; https://www.youtube.com/watch?v=MdGNXIy2aNw

If video isn’t your thing, a more detailed write up about the life, crimes and the last meal of Pretty Boy Floyd is available on my website – https://www.thelastsupperyt.com/post/pretty-boy-floyd-s-last-meal-of-spare-ribs-potatoes-pumpkin-pie

All previous videos & posts are available on the SubReddit ; r/TheLastSupper_