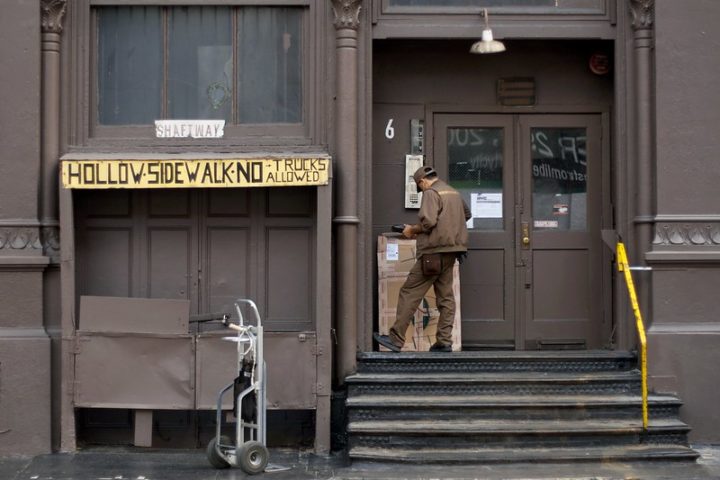 Government-imposed stay-at-home orders and lockdowns during the COVID-19 pandemic have contributed to a boom in online sales. According to one study, deliveries of products purchased through the Internet or by telephone rose 74 percent in 2020.

They have also proved to be a bonanza for an emerging class of Internet-era thieves who grab packages left on doorsteps when the buyer isn’t at home, or otherwise unable to retrieve them immediately.

While early studies indicate that some forms of crime have dramatically decreased during the pandemic, the fact that millions of Americans are now ordering everything from food to video games, clothing and cosmetics from home has provided increased opportunities for “porch piracy.”

One recent U.S. survey involving 1,000 respondents found nearly one in five experienced the theft of an item ordered for delivery since last March, when the onset of coronavirus forced most Americans to stay at home.

The problem remains understudied by researchers, making its impact still hard to gauge―and equally hard to develop strategies to address it.

Our research group at Middle Tennessee State University’s Department of Criminal Justice Administration has set out to change this.

After an initial study analyzing how porch pirates operate and identifying techniques to prevent theft, we sought to define package theft, inform readers about the crime, and examine online retail consumers’ fear of being victimized.

The most recent study in January 2021, Assessing the Fear of Package Theft, published in the American Journal of Criminal Justice, launched what we hope will be an ongoing effort to identify, understand and respond to this emerging crime.

We began by defining package theft as:

Taking possession of a package or its contents, outside of a residence or business, where it has been commercially delivered or has been left for commercial pick-up, with intent to deprive the rightful owner of the contents.

Next, a survey of 562 respondents in 49 states revealed that nearly one quarter (23.8 percent) had experienced package theft.

Extrapolating from that figure, if found to be representative, would make package theft now one of the most common crimes in the U.S.

In contrast, the Federal Bureau of Investigations Uniform Crime Reports (UCR) in 2019 found that around 2 percent of the population experienced a package theft. The difference reflects the fact that UCR statistics represent crimes reported to police agencies, which in turn send them to the FBI. But not all crimes―particularly nonviolent crime―are reported by victims to police.

The nearly 24 percent figure revealed in our survey may seem high. But other studies found even higher rates. A 2020 survey of 2,000 online consumers by the market research company C+R found a rate of 36 percent. A study by Value Penguin found that 43 percent of survey respondents had been victims of porch piracy.

The very nature of this crime makes such large frequencies believable. The offense can be committed with little effort, no expertise required, and minimal risk of detection. Additionally, the seemingly endless resources of online retailers such as Amazon could help rationalize the behavior for thieves who may feel that their victims will not be unduly harmed since giant online retailers often replace the missing item, no questions asked.

In the mind of the offender, “that’s what insurance is for.”

Variables such as gender, residential location and prior victimization impact the fear of package theft significantly. Women were more afraid of package theft than men. Fear was greater in urban and suburban communities than in rural communities. Of course, those who had packages stolen in the past were more fearful of it happening again.

Another noteworthy aspect of our research looks at how the rise in package theft has impacted the behavior of consumers.

Fear-of-crime research has typically focused on the fear of violent crime. The Tennessee study broadened the knowledge base about fear of crime by examining fear of a uniquely specific crime using an index measuring behavioral, cognitive and affective impacts.

Our findings suggested that the fear of package theft led to specific risk-mitigation and risk-avoidance behaviors. Consumers with greater fear were more likely to take preventive measures such as requiring signatures when delivering packages, installing security cameras, or using enclosed delivery locations such as PO boxes.

They were also more likely to use invasive options, such as Amazon Key, that allow delivery personnel to enter your home, or place packages in the trunk of your vehicle.

The major limitation to many of these preventive efforts was cost. The willingness to use such programs was often mitigated by financial cost on the consumer’s part, as well as privacy concerns.

There’s a lot more we need to know about this crime, especially since―even as some lockdown and quarantine policies have eased—there are indications that online shopping is transforming consumer behavior in the U.S. and many other countries.

Unless retailers, delivery services and police devise better strategies to contain it, porch piracy will remain a rising source of both anxiety and economic stress in years to come.